Each year, the Royal Agricultural Society of Western Australia organizes a mega event, called the “Perth Royal Show”. The goal of this event is to “bring the country into the city”. Sounded interesting, so I had to check it out.

It turned out to be a massive event. Apparently it attracts some half a million visitors yearly, taking place at the Claremont Showgrounds, the largest event venue in the area of Perth. For those from Flanders, the entire thing is a bit of a mix between a temporary ‘Bokrijk’ and a ‘Sinksenfoor’. It’s a major carnaval, very popular with kids, while at the same time offering a wide set of pavilions with information on typical ‘country things’: sheep shearing, farming and much, much more. Quite interesting was also a display which showed the original advertisement used to attract farmers to Western Australia:

I’m not so convinced the “no droughts!” was ever an accurate unique selling proposition. Prior to 1909, Western Australia had suffered from drought in 1864-66, 1880-86 and again around the change of the century. Nevertheless, the campaign was succesful. In 100 years time, population has increased tenfold, and due to the economic boom currently underway, this trend is likely to continue.

To transmit messages across the desert, Australia was introduced to the telegraph in 1853. This allowed the swift transfer of information between the different colonies. A number of telegraph enthusiasts offered demonstrations at the show. Those interested could write messages on a piece of paper, have them telegraphed and teletyped into morse.

“She thinks my tractor’s sexy!”. A great semi-crossover country track by Kenny Chesney that you may remember if you ever had the pleasure of hitching a ride with me while I was playing one of my favourite country CDs. The statement may hold true for many Perth women though, cause the setting above was really popular with the ladies. This organization specialized in fixing up the oldest of tractors, and had quite a few of them on display at the show.

Those interested in horses really came to the right place. The giant arena at the Claremont Showgrounds was mainly used for horse riding demonstrations and competitions. This was quite early in the day, so there weren’t that many people watching, but the place certainly filled up for the Grand Parade a little bit later in the day. 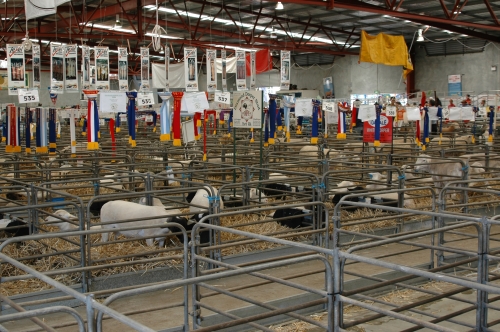 Above: a wood chopping competition, consisting of in-tree clipping of the tree as well as mashing a block of wood that is already on the ground. The second picture shows one of the many, many different food stalls (although most of them were centered around either burgers, fish & chips or kebab). In the last pic you can see the large sheep & goat pavillion (a bit sad as the animals didn’t have anywhere to go, really).

While I was on the train to the showgrounds, I heard kids around me yelling something like “I’ll get a big showbag this year, right dad?” and “Mom, dad said I can have a realllly big showbag!”. For me this was all fine, but it was as if I came from another universe cause I really couldn’t imagine what a showbag was.

When I entered the show, it took me something like 30 seconds to figure out what showbags were. A really cool idea, actually. In general, there are hundreds of shops like the one in the photo above. They sell plastic bags filled with a selection of items, ranging in price from 6 to about 30$. A showbag could contain different packs of candy, a small toy and similar items. Really unusual for a European, but actually a wonderful idea. I have the impression it helps to keep the place neat & tidy as well: there aren’t any vendors handing out free bags with flyers as on many European events. Instead, virtually everyone buys a ‘showbag’; something they are more likely to keep around for longer than a little plastic bag.